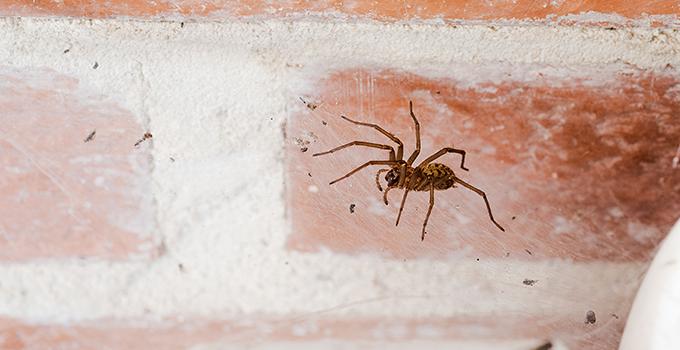 More than 50 different species of spiders exist in Virginia. Spiders are arachnids that have eight legs and have some similarities with ticks and scorpions. Many spiders produce silky webs for ensnaring prey, and others simply use ambush methods. The entertainment industry has traditionally portrayed spiders as creepy and spooky creatures, and some individuals have developed a fear of spiders known as arachnophobia.

Are you wondering how to get rid of spiders in my house? Keep in mind that spiders will generally remain only in settings where they have access to sources of food. What do spiders like to eat? These creatures usually eat moths, mosquitoes, and other spiders.

Are you in need of professional Lynchburg pest control services? Licensed pest exterminators know what kills spiders fast and many of the best ways to prevent them from returning.

The Ten Most Common House Spiders

Many types of spiders in Virginia will move indoors. The following ten species are among the most common invaders:

Among the aforementioned types of spiders, the black widow and the brown recluse are the primary species that might pose health risks to humans. After being bitten, some individuals will experience nausea, muscle cramps, and other symptoms that require medical attention.

Spider 101: Identifying What Spider Is In Your House

The northern and southern black widows have shiny, black bodies with a distinctive red marking on their bellies. False widow spiders usually look similar to the black widows, but they lack the red marking. You can distinguish brown recluse spiders by their “violin-like” marking.

The wolf spider is often among the largest and resembles a tarantula at more than three inches. The nursery web spider appears as a miniature version of the wolf spider. Orb-weaver spiders also produce elaborate webs and have detailed brown markings.

The American house spider usually measures ½ of an inch and has long skinny legs, while yellow garden spiders spin large webs and have yellow stripes with a dark abdomen. Long-legged sac spiders appear tan or brown and form small sacs for resting inside.

Do All Spiders Bite Humans?

Most spiders have fangs and can deliver a venomous bite; however, most types lack the strength necessary for piercing human skin, and some have less potent venom. Spiders typically will only bite humans when they feel threatened. Many of those who think they were bitten by spiders actually have encountered ticks or various insects.

The Key To Keeping Spiders Out Of Your Home

Spiders typically remain in environments where types of prey exist. Property owners must consider preventative measures for limiting the presence of flying pests, ants, cockroaches, and other types of prey. Keep kitchen areas free of crumbs, avoid leaving dirty dishes out overnight, and ensure trash bags containing food scraps have tightly-fitting lids. Limit the use of bright lights near entryways that commonly attract a variety of flying pests that spiders eat.

Exclusionary measures are another key to spider prevention. Inspect outdoor areas of the structure for any cracks or crevices that may allow entry and fill them using caulk or sealant. Repair damaged window screens and install sweeps on the bases of exterior doors.

The team of professionals with All Pest Control & Solutions provides superior services for local customers that are struggling with spiders, ants, cockroaches, and a host of other pests. Keep in mind that we stand behind the quality of our work with a satisfaction guarantee. Contact our office today to schedule an onsite inspection and to learn more about our residential and commercial pest control services in Lynchburg.

Very friendly and knowledgeable! Quick to respond and got appointment fast!